2018 was a great year for Achten Piano! Below are a few photos with explanations of how they were a highlight.

In March I passed some intense testing on Tuning, Repair and Regulation and achieved the “Registered Piano Technician” (RPT) status with the Piano Technicians Guild. Above are the logos that RPTs can use.

Over the Summer I Tuned for the Lee University International Piano Festival and Competition. I tuned the 30 pianos being used around campus and the Stage Pianos for the performances. The most rewarding event (and most stressful) was tuning the Chapel Steinway for the Ann Schein Concert. She was one of Rubinstein’s last students and is a wonderful pianist. She is also a very sweet and patient person to work with. When she tried the instrument she thought it was way too bright (which it was). She offered to practice on a different piano and I spent the afternoon voicing the hammers down (Making them warmer in tone). Usually a full days worth of work! While doing that a hammer broke and I had to make an emergency repair on a nonconventional hammer shank. I was wrapping up just as she returned to try out the instrument before her performance. I later heard that she, later that night at dinner, raved about the transformation I did to the piano. What a learning experience it was!

With the help of some friends I revamped my website and came up with a new logo, pictured above.

Guest Lecturer at Lee U. 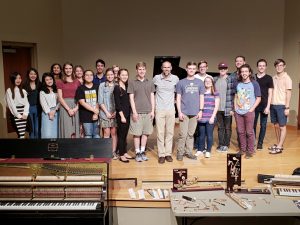 In September I was invited to guest lecture for the Piano Symposium at Lee University. We had a fun time talking about how there is more than just tuning that effect the way the piano sounds (tone) and the way it feels (touch): Tuning, Regulation, Voicing, Friction Reduction and Repair.

I was contracted by Gloria Chien to be the Concert Tuner for String Theory’s 10th season! They do 6 performances a year with 4 of them having piano this year. So far I have had the privilege to tune for Leon Fleisher at the Hunter Museum. There will be 3 more concerts featuring other artists coming up this spring.

What a great year!