Piano knuckles: These are round buck skin circles which are glued to the underside of the hammer and rest on top of the repetition lever and jack. I was called upon by a customer to try and find out why the action felt so weird. It didn’t take long to find that everything was in good shape with exception to the knuckles.

The problem was that the jacks were set too far toward the back of the knuckle and allowed to rub hard against the it causing severe wear. In about half of them they even wore through the leather to the felt underlining. Here is a photo of one worn through (L), one  poorly repaired (C), and one new knuckle (R). 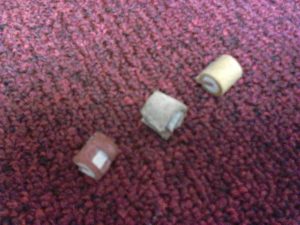 For only a few hundred dollars I replaced the piano knuckles and regulated the action, filed and voiced the hammers and the customer had a great playing and sounding piano again. There were amazed.

Replacing the knuckles is a simple process which begins by ungluing the old ones and finishes by gluing in the new ones.

Here are some photos of the process. Below is are the shanks with most knuckles removed. 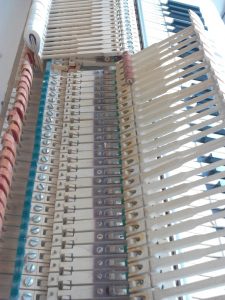 Here are the new knuckles being glued in. 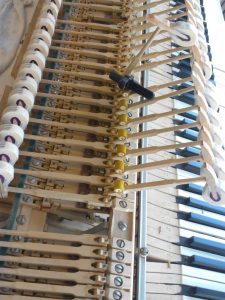 There are many reasons a piano can feel and sound bad. Worn knuckles are a common problem. Even if they have not worn through they may have deep grooves which make it impossible to regulated jack timing and repetition lever height, both of which are necessary for fine regulation.

Sometimes worn knuckles can be filed to removes the grooves. It helps tremendously and is the first step in attempting to repair the knuckle. In my all day regulation I include the knuckle filing when needed. And to top things off I lubricate them and the jack head to reduce all the friction I can so the jack can escape with as little resistance as possible.